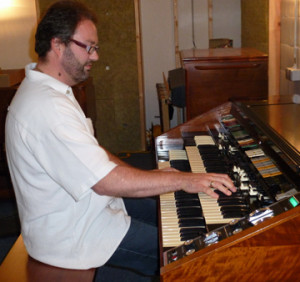 Back to Professional Organists

He started at the age of six with the guitar. Dirk came at first in contact with jazz at the age of 12. It was in a restaurant in Antwerp. At the same time he played already the first notes on piano. Now he plays the guitar, Hammond organ, piano and bass.

In 1989 he decided to became a professional musician. Since than he played as a musician in several theater projects as “Blauwe Maandag, K.V.S., K.J.T. etc. For the moment Dirk plays in different bands.

He ‘s the pianist in the International band “Swingcats” where he works with all over Europe. Also as a pianist he plays with the band “Swingdealers”.

As an Hammondplayer he has his own “Dirk Van der Linden Trio” as well “Triorgan”. He plays the guitar in the International band “The Echoes of Swing Orchestra” and “P.D.J Swing Trio”. Very often he’s been asked to play with other “jazzformations”.

Dirk works a lot for TV and radio in Belgium and other countries.