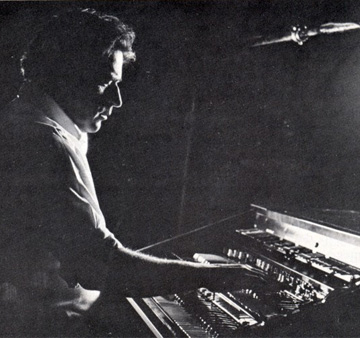 Back to Professional Organists

Roberto’s was the son of Plácido Sasian Benito and Esperanza Sasián Villaverde. Esperanza was adopted by Victor, Plácido’s older brother, and took the name Sasián, which explains the double Sasián in Roberto’s name. The original name from Spain was Sasiaín, but due to a recording mistake it was shortened to Sasián.

Plácido and some of his brothers immigrated to Mexico from Spain. They were brick fabricators in the Mixcoac neighborhood, in Mexico City. Thus Roberto grew up in Mixcoac and attended the Instituto Mexico. His mother Esperanza played the piano and taught Roberto how to play it at which he excelled.

Roberto had many interests. He learned electronics from a course that consisted of monthly lessons by mail and he built several radio transmitters becoming a Ham radio operator. His call letters were XE1ZR and XE1PZR. He built metal detectors and along with friends went to the state of Guerrero in Mexico looking for treasures. Among other interests he loved to fly kites and was granted a Mexican patent for some innovative speaker enclosures. Roberto also worked for General PoPo and won a cup for the best sales person of the year.

His professional career as an organist started when he played at the restaurant Globos, at the hotel El Diplomático, then at the Monumento a la Madre park, at the Teatro Blanquita, at the TV show Siempre en Domingo (Always on Sunday), and at other venues in Mexico. As he was good at sales and was able to repair electronic organs, he was hired by Hammond Organs in Mexico. Roberto became production manager at the Hammond assembly factory in Naucalpan, state of Mexico. After his organ playing he was highlighted as a Hammond artist.

It was mid1960s and organ music was popular. In 1966 Roberto was invited to play at the Houston Music Hall and the success he had led him to his first LP record produced in 1967 by Musart Records in Mexico City. Roberto named his instrument El Organo del Recuerdo. He recorded four LPs with Musart-Trebol, and six LPs with GAS Records Company in which he was accompanied by mariachis. Indeed, Roberto originated the music genre “mariachi with organ.” His records were produced with Roberto’s direct recording technology under the trademark Sasiain. In the 1970s Roberto established, edited, and published the magazine Revista del Organista.

Roberto had an exceptional musical ear and a gift for expressing sounds with the organ; including making the organ “talk.” His musical interpretations speak for themselves. Agustin Lara’s pieces, for example, took a refreshing and exciting turn under Roberto’s organ playing. While rock and roll and other international music dominated the scene, including organ music, Roberto highlighted Mexican music through his innovative mariachi with organ style. He played the X-66 Hammond Organ.

Some of his words were:

“El órgano es como un estado de ánimo, su versatilidad da para cualquier idea y para cualquier sentimiento.”
Roberto had a wide vision for organ music and could have accomplished much more, but he was surprised by death at the age of 48 years.